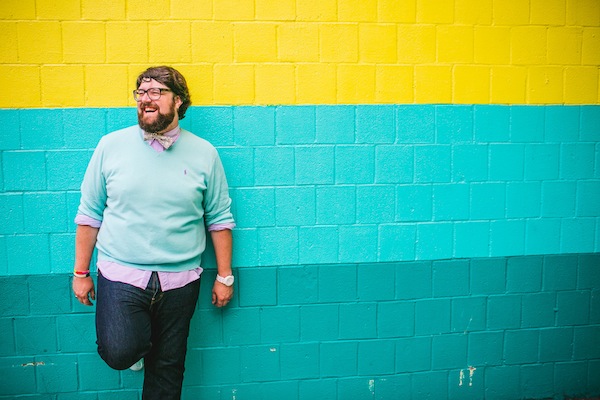 "My passion for social justice work really came after learning just how unaware and uneducated I was about all forms of diversity."

Why talk to college students? What inspired you to want to inspire students?

I love to work with college students because I think in high school you figure out who you are, but it's in college that you figure out WHY you are who you are. I find that's the exact moment when you can challenge someone, that’s the point where growth happens.

I’ll be honest I did not get into speaking because I wanted to be inspirational. I wanted to educate. I used to cringe at being called a motivational speaker. I think Chris Farley’s hysterical SNL character, Matt Foley, kind of changed the way people think when they hear the phrase, “motivational speaker.”  Now I do not mind it as much but it is my goal as a speaker first to educate then to inspire. I think inspiration is a moment in time, a spark, whereas education is a process and more long-lasting. Ultimately I recognize it’s all semantics, but that’s the way I approach it.

How has your comedy background prepared you for your current work?

I started doing stand-up and improv comedy in undergrad and graduate school. Both styles of comedy are very present in my speaking style. I use comedy to illustrate a lot of my main points before hitting them with the take-home message. Keeping the audience laughing equals keeping them engaged. My job is to walk the line between entertainment and education.

Your bio says that you worked on the One World Project in college. Can you talk a little bit about the program and what your involvement in it was? What led you to social justice work in college?

The One World Project at Clemson University is a week-long campus-wide educational initiative surrounding the 2 feet of social justice: awareness and action. I personally was in charge of the “Tunnel of Oppression.” Walking through the Tunnel puts participants in a series of rooms, each highlighting a different form of oppression experienced in our country. For example: racism, classism, homo and trans-phobia, sexism, religious oppression, etc. The education that occurs is very in-your-face and is intended to slightly overwhelm participants. It’s an intentional shock-and-awe approach to social justice education with a mandatory debrief processing session afterwards.

My passion for social justice work really came after learning just how unaware and uneducated I was about all forms of diversity. I grew up privileged and upper-middle class in a town that was at least 90% white and where conversations about social justice did not happen. I was the guy who would say things like, “I’m not racist, I have one black friend” and call my friends “gay” because I didn’t know it was offensive since no one came out in my high school…but plenty came out after they graduated. In college I started making more friends who looked, thought, and identified differently from me. I started asking questions and learning. Also, I became a Resident Assistant (RA). During my first RA training, we were put through a series of social justice awareness activities that blew my mind and caused me to see just how ignorant I was. It was from there on that I started to own my internal biases, went through white guilt, appreciated being called out for saying offensive things, and just kept asking questions. Today that process continues, but I am better for it and am more confident at shutting down hate when I hear and see it.

How do you incorporate social justice issues or what you learned at One World Project into your work now?

I am in an interesting place because a lot of schools and companies do not want to hire a heterosexual white male to come and speak to their audience about social justice. I do not blame them for this; it just is what it is. I do have a social justice talk about recognizing personal biases called “In-reach Before You Outreach,” ready to rock for when that day comes though! In the meantime I work little bits and pieces of social justice education into my other talks. I also use social media as a platform to share my thoughts and spark dialogue. There is always more I could and should do, though.

Can I say, “Hell yes!” All of the –isms in our world unfortunately have and will continue to exist for generations. Most people do not ever leave their bubble. My hometown, albeit a wonderful and safe place to grow up, is a bubble. That’s why I encourage everyone, who has a means to, to get out, leave for a while.  Go to college or grad school somewhere else, take an internship in a different part of the country, study abroad, or at least be intentional with meeting different people. I didn’t know that I didn’t know anything about other people until I left and started asking questions. As I mentioned, social justice has 2 parts: awareness and action. The impact of our action will be greatly stunted the less aware we are. So the weeklong mission or Habitat for Humanity trip you are going on to Mexico won’t make you a social justice advocate.  It’ll make you a privileged person who went to Mexico for a week and then came home only to resume your normal life.

In your life coaching, do you encounter many people who are looking to move towards a life or career that has more of an impact on the world?

Yes and no. Most of the individuals who I coach are trying to get out of their own way. This way they can do the things they want in their lives, not the things they think they have to.  They want to live more on purpose, make less excuses, and start to make decisions that move them forward rather than live a settled and safe life. I do have one client who is trying to work more LGBT advocacy into her life. She wants to be a more influential figure in the community. So she and I are working on shifting her old priorities around to give her more time to focus on becoming just that.

What advice would you give to educators who want to inspire students to take more responsibility for their life and the world around them?

I think we all have to start by telling our own stories. I can quote Gandhi, Martin Luther King, Jr., Mother Theresa, Nelson Mandela, etc. all day but that’s not the best use of my words because I am none of those people, nor will ever I be. I can tell you Steve Jobs or Michael Jordan’s path to greatness but I didn’t live it and it’s also the easiest and cliché way out. Today’s students will become us before they become the world’s future heroes. I think it makes as much sense as trying to inspire a small boy who wants to be a lumberjack with Paul Bunyan’s story. It’s an amazing tale but it’s unrealistic. Instead, introduce that boy to the local logger who is climbing the ladder of success. I’m not saying we can’t have our mentees dreaming big. I am saying that we need to give them realistic examples of how to chase down their dreams. We do that by telling our own stories, where we succeeded, where we slipped and what we learned from both. Inspiring students with personal and tangible examples of how to make an impact will expose them to more realistic approaches on how to start making a difference.

James Robilotta worked as a student affairs professional for over 11 years in residential life and campus activities. James is now a professional speaker and a personal coach. James has been keynoting corporate and collegiate conferences and facilitating staff retreats since 2002, and has won “Top Program” honors on state, regional and national levels. It is his firm belief that as leaders, it is not only your job to influence others, but it is also your job to let others influence you. He runs an authentic leadership blog/newsletter which can be read and subscribed to at www.JamesTRobo.com, or you can follow him on Twitter @JamesTRobo.