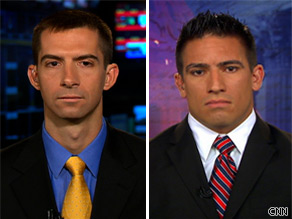 Roberts: So Jake, what do you do instead?

Diliberto: The inclination that somehow we need to be in Afghanistan to keep America safe is not the complete answer. Al Qaeda is a 5,000 to 7,000 operative force that is across the world. They are in Germany, they’re in the United States, they’re in Mexico, they’re all over the place. And you need to do the good things to find these criminals and put them in jail, which is – looks like a worldwide collaborative intelligence effort to find them and root them out.

Roberts: So Jake, do you not buy the argument that Afghanistan is the central front in the war on terror and that as General Stanley McChrystal says, if U.S. troops were to leave and it were to fall back in the hands of the Taliban that it could provide safe haven for al Qaeda again?

Diliberto: Even if you could prevent the Taliban from taking over Afghanistan, you could not guarantee that al Qaeda would not be able to go back there. To think that is a one-size answer to say we need to be in Afghanistan, is not complete. We have fallen in love with a military solution in Afghanistan and that is not the answer.

Roberts: Let me go to Thomas on that. What do you think about that argument that Jake just made, that we’ve fallen in love with the idea of a military solution in Afghanistan? And then on the idea of more troops going on, as you know, U.S. diplomat Matthew Hoh recently resigned his post, saying we’re doing this all wrong, we’re creating more of a problem by having American forces there.

Cotton: I agree that a military solution alone is not the answer. General McChrystal recognizes that, as does President Obama. However, first and foremost, you must have security for – you’re going to hope to have improvements in the government or economic development.

And I know Matt, he actually came to my base last year – or earlier this year – and we visited sometime, and he may not have received the clearest guidance from the civilian side, but on the military side, we certainly received crystal-clear guidance from General McChrystal down to the front line troopers, that you really have to provide security for the people to allow them to be able to develop the economy and develop a strong and more efficient government. The same way we saw in Iraq with the surge in 2007 and 2008.

Roberts: And Jake, what do you say to that argument, that one of the problems that the Afghan people have is they believe the U.S. isn’t keeping their promises. They promised to go in there and provide safety and security and they don’t have it. So the way to get safety and security to win over the hearts and minds of the Afghan people is to send more troops in there so you can more effectively police the area.

Diliberto: Well, our history is short in this country. I think we need to recognize that the Afghanistan people have been bombed for almost 100 years going back to the British at the turn of the 20th century. And this continued violence that’s taking place has caused the Afghanistan culture to be very resilient and also resistant to any sort of foreign powers. So to think that another 40,000 troops or counterinsurgency campaign can be successful really misses the point on this war.

What’s taking place is a cultural misunderstanding and a war on poverty. The real war that’s taking place in Afghanistan is poverty. And more troops destabilizes the area even more. And this overlooks, if you send more troops to Afghanistan, you actually have the unintended effect of destabilizing Pakistan, which is a nuclear-armed, highly volatile region that needs to be a close watch of intelligence and special operations for terrorist activity, not a counterinsurgency campaign.