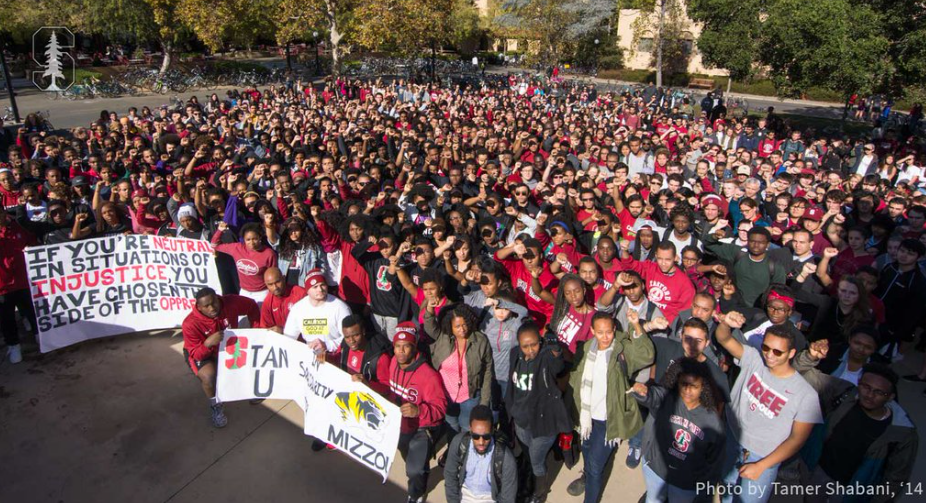 Across the country college  campuses are charged with a  revolutionary spirit, protesting the  racial inequality and discrimination  present at their institutions and  instigating a conversation  surrounding the experience of  students of color.

The students at the University of Michigan have been at the forefront of these protests, as administration has systematically ignored complaints of racist incidents on campus and the now ex-university president, Tim Wolfe, has denied being aware of the “systemic racism, sexism, and patriarchy on campus.”[1]  When death threats towards students of color were posted on the anonymous social media app Yik-Yak and misinformation spread about the presence of the KKK presence on campus[2], one professor refused to cancel an exam, belittling the perpetrators of these threats as mere “bullies.”[3]  A series of incidents, including a group of students in a pick-up truck yelling a racial epithet at the student body president Payton Head, escalated to protests on campus such as hunger strikes and the football team’s refusal to participate in the rest of their sports season unless Wolfe stepped down, ultimately resulting in Wolfe’s resignation.

These incidents are not isolated, nor are they occurrences of the past.  Earlier this year, a student threw a beer bottle at USC student body president Rini Sampath as she walked down the street and called her, “an indian piece of s***.”[4] The Trayvon Martin memorial at Occidental College was vandalized[5] and black women at Yale were denied entry to a Halloween party this past October at the Sigma Alpha Epsilon fraternity due to the color of their skin.[6]  What does it say about America as a nation if students at some of the most prestigious universities in the world endure such blatant discrimination in the year 2015?

I am a student of hispanic descent attending the University of Southern California.  While USC claims to be one of the most diverse campuses in the nation, I still witness and experience microaggressions against minorities on a daily basis.   It is difficult for some  non-minority students to comprehend why minority students are frustrated as often times they are not the victims of these microaggressions.  They have never had a professor assume that they are an athlete because of their skin color, they have never had their culture reduced to a demeaning costume or theme at a fraternity party, they have never been asked if they are an international student because they have ethnic features.  Rini Sampath’s facebook post describing her experience with racism at USC addresses those who remain ignorant to the discrimination happening on college campuses across the country: “And to those who continue to believe we're just playing the 'race' card, I ask you this — what's there to win here? A sense of respect? A sense of humanity? A sense of love and compassion for others regardless of how they look like?”[7]

Students across the nation are protesting for these basic rights, and their demands call for change at an institutional level.  USC Provost Michael Quick recently pledged to enact efforts to improve diversity on campus after the senate passed a diversity resolution this past week and students protested for more professors of color and classes incorporating diversity.  At Occidental College, students are occupying the administrative building with a list of fourteen demands including the immediate resignation of university president Veitch and more funding to the CDO and DEB offices.[8]  This is just the beginning.  It is going to take more than a president stepping down or more classes on race and gender to eradicate the systematic racism that exists on college campuses, but these protests reflect the revolution occurring in schools and society by a generation that will no longer tolerate ignorance and injustice.