Education is for Action 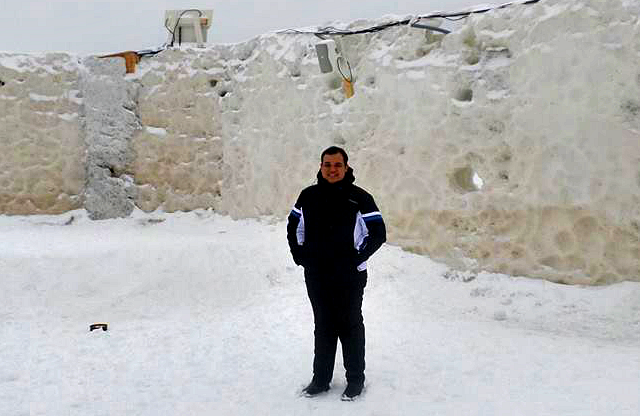 Anil channeling “Elsa” in the center of an ice palace in Oulu, Finland.

I would never call myself a 'straight A student'. Heck, I would probably never have anything to do with word 'straight' – except  that I believe education has the ability to provide a straight-forward solution to the same old problems.

I grew up in the Philippines, where private Catholic schools ran rampant like snow in Finland. In my years in school, I was often considered delinquent. I remember being the student who never paid attention in class and was always prone to being sent out. What was viewed as a punishment was, for me, a chance to escape from the pressure of academics. Instead of sulking, I was in my own bliss. I  would imagine how life would be if I had the powers of Jean Grey, and I could save the world from the villainous Brotherhood of Mutants. Safe to say, it never happened. But it was a nice thought. Or could have been the spark of my desire to reach out and help with what I can.

University was a different story. I was no longer bored of the same old math drills that never fed the hungry children on the street. I was far away from standardized tests that never helped poor communities homeless from a typhoon. I  was not in school for just me. Suddenly, there was an opportunity to do things that have more meaning, that have purpose – and to know that education is not just for the building of the self, but it is crucial for the rebuilding of a society.

I discovered John Dewey, and he became my hero. He became my philosophy. He believed that integrating social issues in school curricula would provide the world with students who know themselves as citizens first. Students, who of a certain age, have the ability to engage in critical issues, represent a strong set of humane ideals, and contribute substantial changes for development. This progressive education became my religion; and its fruition is what I see myself working for in my lifetime. It also bore the idea of service-learning; something I consider my passion. School is not just about formulas. Its now about utilizing all our learning to contribute to those who need it. The idea has taken me from the Philippines to Finland,  to America, and in a few days, to South Africa- in an attempt to learn more and give more.

My experience with Brave New Films and its Brave New Educators program has made me believe that service-learning is actually within reach. It is remarkable to see that the Brave New Educators campaign seeks to build a more informed citizenry- and sparks a call to action through their films. This, in turn, will serve as a source of information for students (and adults) everywhere. Information that will provoke the mind and no doubt ignite the heart.  I have never met a more passionate group of artists with the desire to fight injustice through the use of media, and I am more than thankful I made a stop to California.  Taking what I have learned from this program, it serves as an experience critical to my research- and hopefully a key to see the implementation of service-learning. On top of that, it  didn't hurt to leave California feeling just a little bit braver.