A Journey Through Service Finds a Need for Education Reform 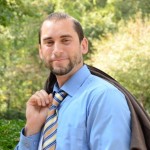 In 2008, during my first day as a teacher, I had a moment of internal panic in front of my 7th grade special-education class in Southwest Philadelphia. I found myself questioning my choice to teach and I remember thinking: “What am I supposed to do now???” I wondered how I had gone from a position as an Army counterintelligence special agent, to a police officer, to a 7th grade special-education teacher. As a new teacher, I was told to expect the worst: profanity, violence, and a high illiteracy rate. As the first week unfolded, those expectations became a reality.

While trying to survive my first year as a teacher, I faced an onslaught of racial slurs, insults, and physical attacks. I struggled to understand why my students had so much anger and hatred, and was constantly puzzled at their relentless rejection of my efforts to help them learn. With reading levels averaging at the third grade level, I tried my best to prepare them for their 7th grade state test in the spring, knowing full well that the test would be far too challenging for them to pass.

I left that year with a sense of shock and frustration. Our school was poorly funded, the administration was selfishly corrupt, and my class had limited supplies. As I reflected on my experience, I realized that despite being a veteran and former police officer, teaching was the hardest thing I had ever attempted. Because of the hardships I witnessed that year, I wrote and published Service, A Soldier’s Journey: Counterintelligence, Law Enforcement, and the Violence of Urban Education, where I dedicated a third of my book to exposing our current system of education for what it really is: a failure.

We live in a society where money is cut from education and redirected to prisons, yet we are not supposed to discuss this with our students. Our children run the streets and face bullets and assaults, but we are expected to encourage them to prepare for a test that means nothing to them. We are setting them up to fail, and instead of investing in their education, we build them more jail cells. When the cells are not filled, prisons can now sue the states to ensure that money is spent on students’ incarceration and not their education. Education is our future, and if we don’t start making a drastic change now, Americans will soon lack the intelligence to even recognize change is needed…

Education is the key to our future with both the power to enlighten and the power to enslave. Currently, it is working toward the latter so as a teacher, I try desperately to inform my students of the injustice being placed on them. I recently came across Brave New Educators and am excited over the documentaries they have made available to teachers for free. They provide an excellent starting point to inspire thoughtful discussions about the many issues that plague our society as our children’s futures are slowly dismantled. By informing our students about these injustices, they will be better prepared change them. Because of this campaign launched by Brave New Educators, I find a sense of hope in knowing that in my quest toward education reform, I am not alone.

Dennis Nappi II is a veteran, former police officer, teacher and author. Dennis hopes his writing will bring more support to returning veterans, improve relations between citizens and police, and inspire education reform. Dennis also runs his blog, www.ServiceofChange.com, where “Small changes among the masses can have a massive impact across the world!”