An online Community Forum on Saturday, March 28 will examine how the constitutional right to vote is under attack in America and what can be done to protect it.

The event, organized by Chalice Community Forum, will unfold in two stages. First, those who want to participate should go online to view the 38-minute documentary film “Suppressed: the Fight to Vote” sometime before  the forum. The 2019 film shows how rampant voter suppression affected the 2018 gubernatorial election in Georgia, where Stacey Abrams narrowly lost her bid to become the nation’s first black female governor.

Then at 7 p.m. on March 28, former Santa Paula City Council member Laura Flores Espinosa and Betsy Patterson,  President of the League of Women Voters of Ventura County, will lead an online discussion of the film on the website Zoom. To register for links to the film and the online forum, visit https://zoom.us/meeting/register/tZckcOqsqTstgiVUtc6zoddTyWbQJfVg0A.

In the Georgia election, Democrat Abrams lost to Republican Brian Kemp by 54,723 votes out of more than 3.9 million cast.  The film puts human faces on a story of  voter suppression. Among them are an 89-year-old man who found that his polling place had closed and the new one was too far for him to walk, a 23-year-old whose absentee ballot was never mailed to her despite repeated requests, and people waiting four hours or more to vote.

“The determination of many voters was inspiring, but still many failed to overcome the roadblocks placed before them,” director Robert Greenwald said in a statement about his film. “This isn’t right, and no voter in this country should accept this.”

The online forum will feature a discussion of the film, stories from the speakers, examination of current threats to election integrity and what can be done about it.  For information, visit forum.chaliceuu.org or contact Randall Edwards by email at [email protected] 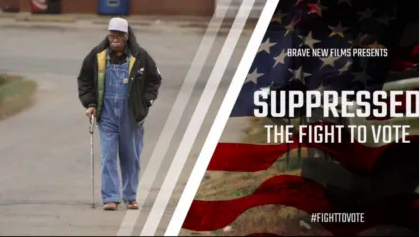