By Emily Alpert Reyes for the Los Angeles Times

Two Los Angeles City Council members began a push Tuesday for a new city ordinance that would crack down on businesses that cheat workers of their pay.

"If you steal from a store, you go to jail," said Councilman Paul Koretz, who was joined by Councilman Gil Cedillo in moving to draft a proposal. "But employers who cheat their workers out of their hard-earned wages usually get away with it."

Koretz argued that a new city ordinance would give Angelenos another tool to battle wage theft, ensuring that workers get the money they deserve and leveling the playing field for lawful businesses.

Wage theft can include failing to pay minimum wages or overtime, forcing workers to labor through break periods required by labor laws, and illegally deducting workplace costs — such as a sewing machine or uniform — from their paychecks. A UCLA study four years ago found that the vast majority of low-wage workers surveyed in Los Angeles County had suffered some kind of wage theft, steeper rates than in New York or Chicago. 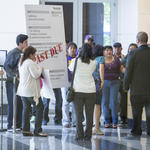 "Los Angeles is really the wage-theft capital of the country," said Tia Koonse, legal and policy research manager at the UCLA Labor Center. "Workers are simply afraid to come forward."

The exact details of the new rules have yet to be determined. Workers' rights activists suggested they could punish businesses by revoking licenses or permits, establish a local agency to investigate theft claims, or ramp up protections for workers who report such violations. Other cities have already passed local laws that take aim at wage theft, including Chicago and Seattle, Koonse said.

"We're trying to empower the city attorney to be more aggressive," Cedillo said.

State rules against stiffing workers exist, but activists and researchers say the process to pursue claims with the state labor commissioner is woefully slow and ineffective. In a study released last year, the UCLA Labor Center and the National Employment Law Project found that 83% of California workers who won such state judgments were unable to recover their lost wages, often because the business had closed.

cComments ADD A COMMENTSEE ALL COMMENTS
4

Felipe Villarreal said he was shorted $67,000 from a former job at a Westside carwash that has since shuttered. He said he has yet to receive any of the unpaid money, despite winning his claim. The lost money would have made a difference for his children back in Mexico — now 18 and 24, he said.

"All we want is what we worked for," said Villarreal, who now works as a labor organizer and was one of scores of workers and activists who crowded the steps of City Hall to back the proposal Tuesday.

His story echoed that of Axel Paredes, a handyman who said he had been repeatedly underpaid in construction and warehouse jobs in the Los Angeles area. Paredes said in many cases, he was promised $9 an hour but only paid $5 or $6 hourly, too little to cover his rent or send money to his family.

"I didn't know what to do," Paredes said.

Koretz and Cedillo's push is not unprecedented: Nearly five years ago, Los Angeles leaders voted to draft new rules against wage theft, sending the proposal to city lawyers so they could hammer out details. Despite that vote, the ordinance never came back to the council for approval. Former City Atty. Carmen Trutanich said he couldn't immediately recall Tuesday morning what had happened to the proposal.

Koretz and Cedillo are asking to revive the old motion, which called to criminalize wage theft and step up enforcement against businesses that stiff their workers.

The Los Angeles Area Chamber of Commerce said it was awaiting more details about the proposed rules. "Everyone is against theft," said chamber senior vice president Ruben Gonzalez, but "we all need to see the details of any enforcement mechanism ... and any unintended consequences, such as creating greater backlogs in our court system."