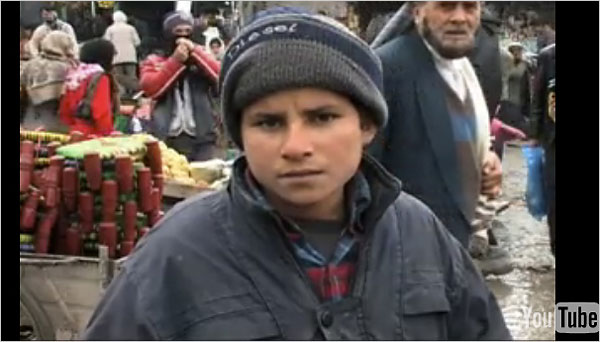 The activist filmmaker Robert Greenwald has tried for years to speed up the production process for his documentaries. Now, he says, he is creating one he can release almost immediately, in stages.

Mr. Greenwald is showing “Rethink Afghanistan,” a skeptical view of America’s war strategies, in five parts on the Internet, with the implied hope that it will contribute to the foreign policy debate. With the first two parts of the film already online, he arrived in Afghanistan on Sunday to conduct more interviews for what he calls his first “real-time documentary.”

Mr. Greenwald is well known in some progressive circles for his films about war profiteers, Wal-Mart’s corporate practices, and the Fox News Channel. His company, Brave New Films, uses documentary expertise to mount political campaigns, including a YouTube series last year about John McCain and what the company called “the politics of hate.”

“Rethink Afghanistan” is being shaped both as a film and a campaign at the same time. Mr. Greenwald is already posting installments on the film’s Web site, RethinkAfghanistan.com, and also on YouTube. It will eventually be stitched together into a full-length feature. As he has done in the past, Mr. Greenwald will take his finished film to the public using a mixture of DVD sales and house parties. He said he also expected to receive some theatrical distribution.

“We will keep adjusting it as events in the news change and as policy changes,” Mr. Greenwald said in an telephone interview last week before he departed for Kabul, the Afghan capital. The film’s Web site asks supporters to call for oversight hearings on the United States policy in the region.

By producing his film-and-activism campaign at an accelerated pace on the Internet, Mr. Greenwald is capitalizing on new technology that allows filmmakers to produce their work more swiftly.

Timeliness is of the essence in releasing a documentary about public policy. Films like Michael Moore’s “Fahrenheit 9/11” have chronicled events that took place within a year of their release. But Mr. Greenwald, a longtime television and feature film director, said that as he spent more time in the documentary realm, he realized that even the one-year turnaround seemed too long for his films.

In June 2003, when he started “Uncovered: The War on Iraq,” a documentary about the reasons for the war, Wes Boyd, a co-founder of the liberal group MoveOn.org, asked Mr. Greenwald whether the project could be completed in a month. That, he said, was when the time question first really hit him.

It wound up taking five months to finish a short version of the documentary, and a longer version of “Uncovered” was produced for theaters and film festivals by mid 2004. Over the years, Mr. Boyd said, Mr. Greenwald “has done a remarkable job in ramping up production speed, overall capacity, and quality.”

It helps that the Internet increasingly serves as a global distributor for video. No distributor “moves at the speed of YouTube,” Mr. Greenwald said.

His current subject, Afghanistan, is especially time sensitive. President Obama has already ordered 17,000 more troops to the country and is on the verge of outlining a new strategy. Given that backdrop, “it didn’t seem to make sense to make a film that would come out even six months from now,” Mr. Greenwald said.

The first part of the film, a 12-minute section titled “More Troops + Afghanistan = Catastrophe,” reflects the filmmaker’s opposition to a troop escalation. The second part examines the role that Pakistan plays in the region. Editing of the second part continued until moments before it was uploaded to YouTube on Thursday.

Later parts will address the other issues, including casualties and terrorism. Mr. Greenwald said the chapters of the film would seek to raise a series of questions about the war in Afghanistan: “How many troops? How long? How much is this going to cost? What is the end mission?” In Afghanistan he plans to interview Afghan politicians, former Taliban officials and members of the country’s peace movement.

While he is there, he plans to record video blogs with updates about his trip. Meanwhile, back in California, his production staff will be working on Part 3 of the film.

Owing to the shoe-string nature of operation, the production company is also asking for donations for the trip, even as it takes place. “It’s an interesting juggling act, Mr. Greenwald said, “between researching to find people, interviewing the people, editing the pieces, seeing what is happening in the news — and raising funds at the same time”