Have you ever wondered why you’re seeing the same damn election commercial every day for months? Have you considered why outside groups have decided to invest in elections? Well, may we introduce Citizens United. Citizens United sounds like just the kind of generic slogan you might hear encouraging you to go out and vote tomorrow. However, Citizens United refers to the Supreme Court decision that enabled companies to spend unlimited amounts of money on political campaigns, and this year’s midterm elections are bearing the significant marks of a post-Citizens United America.

For the 2014 mid-term elections, the Koch brothers have taken full advantage of the law they essentially paid to create through funding organizations that prepared the legal briefs sent to the Supreme Court advocating unlimited corporate spending, as highlighted in Koch Brothers Exposed.

The Super PAC linked to the Koch brothers—Freedom Partners Action—recently added another $6.5 million to its TV spending, on top of the near $15 million it’s already spent this election cycle on the Senate candidates they support. This election, the one where voter turnout is expected to be the lowest in years is breaking additional records. The election taking place tomorrow is the most expensive congressional election ever. EVER.

What else could be done with all this money? We could end poverty for millions of Americans. We could create a higher education system that’s affordable for all who want to go. We could even eradicate our country’s homelessness issue in one fell swoop. Instead, groups with more money than they know what to do with, much like the Koch funded Freedom Partners Action, are spending gobs of money to sway this election. Oh, and send duplicitous ads with incorrect voter registration materials to North Carolinians.

But if the idea of billionaires buying the Senate makes you feel helpless and angry, you have the luxury of asking yourself what is more appalling—massive political funding for senators, or buying local school board elections—because the Koch brothers did that, too.

No election is too big or too small for the billionaire Koch brothers and their allied political action arm Americans for Prosperity. They are nightmare for anyone who believes in fair and free elections. The rise of the politicking from the Koch brothers has even had a damaging impact on their business, Koch Industries. Just this year, thanks in part to BNF’s refreshed Koch Brothers Exposed and the relentless Senate Majority Leader Sen. Harry Reid, Koch Industries is having an image problem. 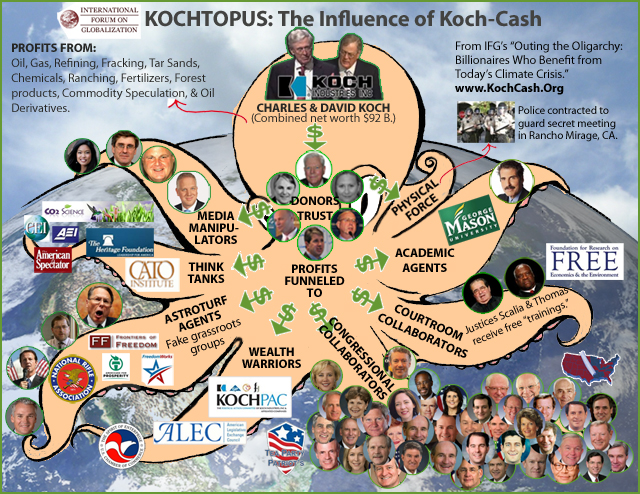 Gallup polls are predicting the lowest voter turnout in years, raising the stakes even further to cast your ballot—that is, if you’re even allowed to. The Koch brothers also pour millions of dollars into voter suppression tactics, targeting African Americans, Latinos, the elderly, young voters, and even people with disabilities, “because they want to cut of the participation of people who are not behind their corporate agenda,” says Judith Browne-Dianes, the Co-Director of the Advancement Project, in Koch Brothers Exposed. They’ve been instrumental in introducing legislation that would require voter identification across the country, and placing predominantly white “poll-watchers” in front of polling stations in black neighborhood as apart of the “True the Vote” volunteer campaign.

Committed voters interviewed in Koch Brothers Exposed from Pennsylvania, Missouri, and North Carolina have all fought back successfully against these voter suppression tactics. Taking back our country from the millionaires and billionaires who fund campaigns and try to buy democracy won’t be easy, but there’s a lot at stake. This year is not the year to sit on the sidelines - there is too much at stake. Fifteen million dollars is nothing to the Koch Brothers. In fact, it’s an easy investment to get the government of their dreams.